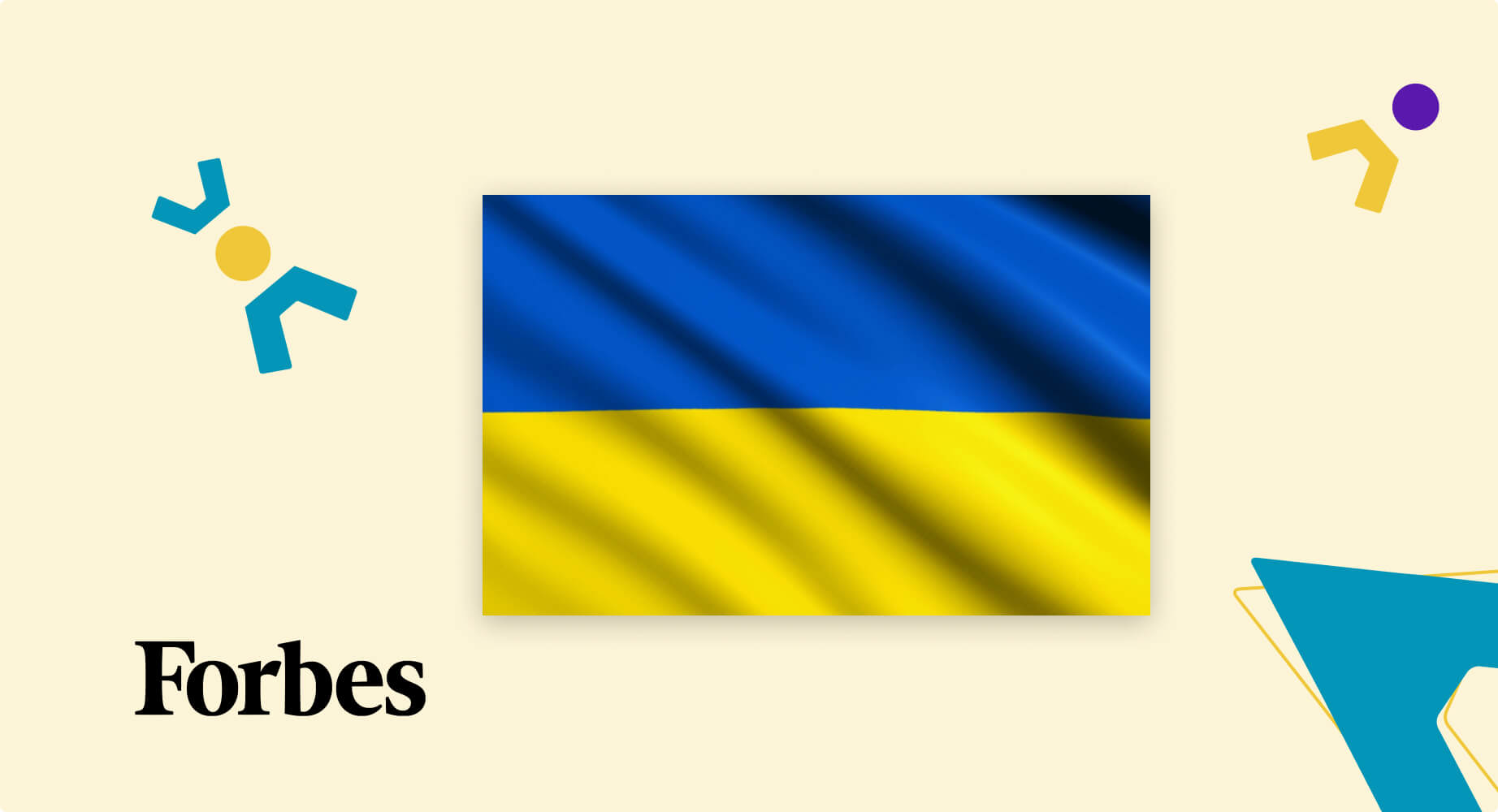 Over the past decade Ukraine has become a major hub for remote software developers, including an estimated 500,000 who freelance part-time or full-time. In his recent article, Forbes contributor Jon Younger outlines what several talent platforms and marketplaces are doing to support Ukrainian freelancers.

We’ve seen an extraordinary outpouring of assistance in support of Ukraine. Amid pictures of broken streets and roofless buildings, Ukrainian’s courage in defense of their country has energized the world. We know it is beyond difficult for all Ukrainians – including the 500,000 Ukrainians who freelance part- or full-time through internet based freelance platforms - to live a “normal” life as businesses have closed, work has dried up, families are separated, and men and women take up arms or take refuge in shelters. The U.N. refugee agency estimates that 10 million people have been displaced across Ukraine, with 3.4 million having fled to neighboring countries such as Poland. The U.N. human rights office reported at least 902 Ukrainian civilians had been killed, though the real toll is believed much higher. At least 112 children had been killed.

The global freelance community has come together in an impressive display of both independent and coordinated support. Iman Fadaei, founder of TalentPools.io, has done amazing work as a leader of this effort by launching the non-profit freelance platform RemoteUkraine. Describing what his team have achieved in the past two weeks, he wrote, “1031 employers from 70 countries have posted 1185 jobs for 4500 Ukrainian refugees, many of whom have now found work. It’s a collaborative effort between tech businesses and civil society. TalentPools.io provides the platform and coordinates volunteers. Intercom provides user engagement tech. AWS provides the infrastructure. CloudFlare provides network security. GreenLight.ai and Remote provide an EOR/POE service. Open-Assembly kickstarted promotion through their network of open tenant leaders. And NGOs like RefuAid help new hires navigate accommodation and VISA logistics.”

The Freelance Voices series regularly shares the experiences and reflections of freelancers in different countries. In this special issue, #10 of #freelancevoices, we share some of the contributions made by freelance community members in support of their Ukrainian colleagues. For example, some of the largest platforms have made significant contributions:

Andela, a global platform headquartered in the US, is building a resource database for refugees to find project work or employment. The platform is also matching donations to a connectivity fund to help Ukrainians and refugees replace lost or broken tech, offering financial support to talent through signing bonuses and covering the first month’s salary for tech freelance refugees who are hired. The platform has also partnered with Remote.com for visa and immigration support (who are waiving their fees for all refugee hires), and providing payment support to payroll-only clients who need support in paying refugees. They will also offer payment in crypto which is helpful at this time.

Upwork unveiled a way to send Ukraine-based freelancers a donation through Project Catalog—purchase a project and funds will be sent directly to them, no freelancer fees and no work required. New product features can also help Ukraine-based talent preserve their hard-earned reputations, access funds more quickly, and connect with clients about their safety and work status. Last but not least, we donated $1 million to Direct Relief International in support of the Ukrainian population.

Appjobs.com, a large Swedish platform has focused on helping freelancers and especially refugees. They have made Ukrainian versions of all content and user flows for products in neighboring countries, e.g., Poland. They have also produced "get started" guides in Ukrainian to enable freelancers to start outside of Ukraine (registrations, licenses, taxes), and released tax calculator functionality to help Ukrainians understand their net earnings in outside of Ukraine.

In addition to large platforms, regional and smaller platforms, startups and even ecosystem partners are participating:

Torc in the US, a new freelance marketplace, reports that they’ve already identified 100s of available jobs for Ukrainian freelancers and is providing assistance to Ukrainian companies that need to hire top tech talent. Torc has partnered with a Ukrainian software development education/training organization to offer ongoing skill building and career growth opportunities to their platform.

Vicoland.com, a German platform expanding in the US, worked closely with freelancer-teams from Ukraine to help them find accommodation in Hungary.. Additionally, they are working together with freelancer groups (“Vicos”) from our marketplace to help NGOs maximize their impact in the ongoing war through the #techforukraine initiative.”

Proteams.com in Denmark, a smaller regional tech platform focused on enterprise clients, noted that while their numbers are less than the large multinational platforms, they had arranged more than $66k worth of jobs for Ukrainian freelancers since the occupation.

GreenLight.ai in the US has opened its infrastructure to enable companies to easily onboard and pay Ukrainian professionals, and they are waiving fees. Companies can invite Ukrainian freelancers to sign up on GreenLight, and they will have them signed up and ready to work and get paid! They will provide the legal, tax, time and payment management, making it easy to hire international talent, and ensuring the company is protected.

Outvise.com in Spain, a leading regional tech platform, organized a food collection and money fundraising led by the platform and coordinated with a Ukrainian NGO in Barcelona called "Smiles of Ukraine" authorized by the General Consulate of Ukraine. The donations are processed by the authority, and the food is delivered to Poland and, from there, sent to Western Ukraine (mainly L’viv) where distributed among those in need where possible. All the colleagues and co-workers actively supported and participated, some directly buying food and some donating money to buy it. So far, we've had 2 rounds of donations (2 cars approximately) and we're planning to organize a big baby food purchase this week as well.

Expertpowerhouse.com in Germany reports an active program to support freelancers in Ukraine and the region, starting with becoming part of “imagine-ukraine.org”, providing project and job opportunity and coaching of refugees. Also, we supported a great initiative by one of our freelance consultants to raise money for Ukrainian refugees in Poland.

UnderPinned.com, a UK freelance community, has donated free membership in their freelance accelerator program for refugees of the Ukraine war. UnderPinned is a community of 50,000 part- and full-time freelancers, and membership provides the tools and connections that freelancers need to preserve their livelihood in this uncertain period.

Finally, the Brackets Club, a donation-based non-profit dedicated to the freelancer community, is putting money into the hands of freelancers in Ukraine: Helping them secure train tickets out of the country, providing basic supplies and sharing connections for success. Its goal is to assist freelancers and their families who are unable afford healthcare or insurance.

This group of platforms and ecosystem partners – large and small - is only some of the outpouring of support for the Ukraine freelance community. The startup culture was made for this moment and freelancers like Iman Fadaei are showing the way. John Healy, who leads the Center for the Transformation of Work (CTW), an organization that has worked closely with RemoteUkraine.org and many platforms to organize and coordinate aid to Ukrainian freelancers put it this way: “It’s impressive how quickly and sincerely the freelance community has come together to support Ukrainian colleagues and their families. The individuals and organization in our community at CTW show what can be achieved when the entrepreneurial spirit of the open talent economy couples with modern technology and a shared purpose to positively impact the lives of the freelance community. And, we’ve only just gotten started.”

Jon Younger is an HR thought leader, author, teacher and early stage investor. Writing about the freelance revolution and the future of work. Books include HR From the Outside In, HR Transformation, and Agile Talent. Follow Jon on twitter @jon_younger, and check out his Linkedin page for new articles.